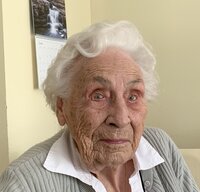 On April 18th, in her 103rd year, our remarkable, adventurous, and determined Mum and Granny Olive passed away peacefully and went to join her beloved Homer.

She spent her idyllic childhood with her siblings and cousins in the village and at the seaside. Though she had little in the way of a formal education, she was blessed with a father who loved to read and a mother who loved to play cards. These activities would define her life.

At the age of 16, Olive went to London for secretarial school. At the start of World War II Olive met and married a young RAF pilot, Homer, from Canada. They spent the war in Egypt and London and later lived for many years in different parts of the Middle East while Homer flew for the Iraqi Petroleum Company and later in Burma for the Burma Oil Company. Many competitive games of tennis and golf were enjoyed during those years.

They settled in Toronto in 1965, but after Homer’s death in 1968, Olive returned to Turkey to look after her aging Mother who eventually died at age 100. She then returned to Canada 30 years ago and started the final chapter of her life in Saint John.

Olive was an avid and competitive bridge player and was actively playing up to her 100th birthday. Olive was a voracious reader and enjoyed recommending books to the rest of the family. She loved a good game of crib and enjoyed it even more when she won. She was blessed to be able to do both of those activities until just a few weeks ago.

She is finally reunited with her husband, Homer, as well as her son, Jim, and her infant daughter, Neda. She was also predeceased by her parents, Harold and Phyllis Charnaud, her sisters Edith Sell and Betty Rasmussen, her brother John Charnaud, and her nephew, Peter Sell.

Thank you to the staff of the Church of St. John and St. Stephen Home for taking such good care of Olive over the last couple of years.

Arrangements are under the care of Brenan’s Funeral Home, 111 Paradise Row, Saint John (634-7424). Visitation will be held on Saturday, April 30, 2022, from 11 am to 12 noon, at which time a Celebration of Olive’s Life will begin. The service will be livestreamed, and will be viewable by visiting Olive’s obituary on Brenan’s Website and clicking on Funeral Livestream.

In lieu of flowers, donations may be made to the Church of St. John and St. Stephen Home or the charity of the donor’s choice. Please place online condolences and remembrances at www.BrenansFH.com.