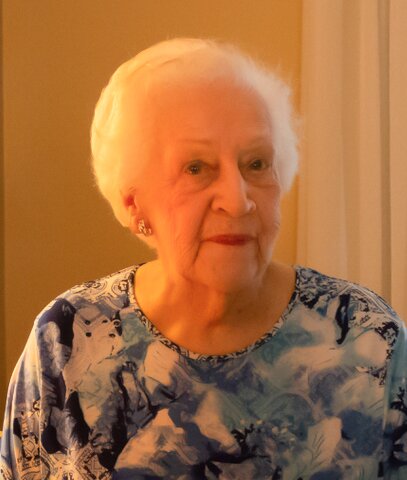 It is with great sadness that the family of Vivian Chase Garrett (Stackhouse), loving wife of the late Robert Garrett, announce her passing at the Loch Lomond Villa on March 29th, 2022. She was born on May 11th, 1930, in Saint John to the late George and Sadie (Chase) Stackhouse.

Vivian grew up in the lower west side (Carleton) of Saint John and was a member of St. George’s Church in her youth. She attended New Albert School and went on to Vocational School. She loved to sing and often spoke of the days when their lives were centered around church choirs and singing with her sisters.

Vivian worked at T.H Estabrooks before marrying her husband Bob in 1951. The years to follow would be filled with lots of memories and momentous occasions while raising six children. Some of her fondest memories were of Sunday dinners surrounded by her family, and if someone showed up unexpectedly there was always an extra plate. Her roast beef dinners and desserts were always a special treat.

After raising her family, she worked at the Telegraph-Journal until her retirement. Vivian was a member of The Church of The Good Shepherd (Manawagonish Rd.) for over 40 years.

The family would like to thank the staff at St. Joseph’s Hospital (Transitional Care) and the staff at Loch Lomond Villa (Elm House)

Arrangements are under the care and direction of Brenan’s Funeral Home, 111 Paradise Row, Saint John, NB (634-7424). A Funeral Service will be held at 1:00 PM, on Friday, April 1, 2022, from The Church of The Good Shepherd (Manawagonish Rd.), with a family visitation one hour prior to the service. Interment will take place in Cedar Hill Extension Cemetery following the service. Donations in memory of Vivian may be made to The Heart and Stroke Foundation of New Brunswick or to a charity of the donor’s choice. Online condolences may be placed at www.BrenansFH.com

Share Your Memory of
Vivian
Upload Your Memory View All Memories
Be the first to upload a memory!
Share A Memory