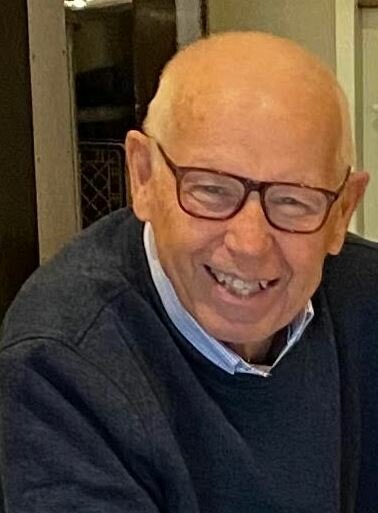 Dirk Larooi was born in Beetgumermolen, Friesland, the Netherlands. He passed away peacefully at the Saint John Regional Hospital on July 13, 2022 with his family by his side. He had battled cancer in recent years but it never dampened his sense of humour or his strength. Dirk joined the merchant marines as a young man, which led him to a port in Prince Rupert, BC, where he met Donna, his eventual wife of 51 years. Together they lived in the Netherlands for a few years before he immigrated to Donna’s home province of Nova Scotia in 1974. His career soon brought him to Saint John, NB, and he and Donna raised their family in Hammond River. He worked as a manager at Irving Shipbuilding for 37 years, truly dedicated to his work and continuously caring for his employees. He was a long-time member of his church, where he served on almost every committee and sang in the choir. Many believe Dirk’s first language was Dutch, but it was actually Frisian. Dutch was his second language and English was his third (eventually main) language. Despite growing up with speed skating, Dirk became a huge hockey fan here in Canada, both locally and watching games on TV. He also enjoyed riding his motorcycle, travelling, skating, riding his electric bicycle, and RVing, making three trips across North America in his retirement. He frequently met with friends or family for a meal. It’s hard to know which he liked more -- the friends or the food! He loved chatting up friends, colleagues, and strangers everywhere he went.

In addition to Donna, Dirk is survived by his daughter Lysbeth of Saint John; son William (Sarah), granddaughter Adelynn and grandson Arie of Cochrane, AB; and sisters Boukje and Annie and brother Sjoerd all in the Netherlands. They will dearly miss him, as will many others on both sides of the Atlantic including his in-laws, 6 nieces and a nephew, and many good friends. He is predeceased by his parents, Wietse and Martha Larooi.

The Larooi family expresses deep gratitude to Dirk’s health care team: Dr. Patrick Maloney, Dr. Amy Groom, Dr. Robert Thompson, KV Extramural, and everyone in the Palliative Care Unit where he was treated with dignity and light-heartedness in his final days.

Arrangements are under the care of Kennebecasis Funeral Home, 152 Pettingill Road, Quispamsis, (849-2119). A memorial service will be held at 11 am at Saint Andrews Kirk United Church at 196 Hammond River Road, Quispamsis, on Wednesday, July 20, 2022. Visitation will be held at Kennebecasis Community Funeral Home from 2-4pm and 6-8pm on Tuesday, July 19, 2022.

In lieu of flowers, donations in Dirk’s memory may be made to the Saint Andrews Kirk United Church Cemetery Fund or the Canadian Cancer Society or a charity of the donor’s choice. A livestream of Dirk’s funeral will be available on Dirk’s obituary on the Kennebecasis Funeral Home website: www.KennebecasisFH.com

Share Your Memory of
Dirk
Upload Your Memory View All Memories
Be the first to upload a memory!
Share A Memory