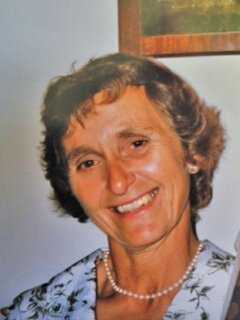 She studied physiotherapy at McGill, graduating in 1955. She then went to Europe with her great friend and physio colleague Jocelyn Carey (later Willis) where they hitchhiked through various countries (“always in skirts, never pants”), and then worked at Paddington General Hospital in London. On her way home to the Maritimes on the liner Nova Scotia she met an English merchant mariner, Roger, and they began a long courtship of letters and port visits, as he sailed around the world. They were married in Saint John in April 1958. They lived first in Montreal but in 1961 settled in a home in Kennebecasis Park, outside Saint John, where they raised four children and lived for 55 years.

Deedee was a ball of love, fun and energy. She managed a full house of meals, drives and needs with impressive stamina, later drifting off after full days during the 10pm news. She returned to her physio career part time at St. Joseph’s Hospital in the late 1970s, and enjoyed rapport with patients and colleagues, and lunchtime walks to the City Market to buy dinner time fish. Deedee was a tender and calm mom, but knew when to call out your hogwash. Fresh air was her favorite thing, and she loved being in and on the water. Dee paddled and camped beside many rivers in New Brunswick, and was a calm and joyful sailing partner. She was the first family member to buy a kayak. After one of her kids started to windsurf, she bought her own at age 49 and scooted about Belleisle Bay. She was a sometimes challenged but diligent golfer. In winter she skied, and had happy runs with all 11 grandchildren, and was a popular chairlift companion for her nan-isms and enthusiasm.  In later years a perfect day was a drive to Poley Mountain with CBC classical roaring, five runs, coffee, five more, and home for lunch. Her only regret, she said many times, was not learning to snowboard. She assembled beautiful wildflower bouquets, and sang in local choirs. She loved her community and those local news sections in the newspaper. Dee understood what matters, and was stoic and strong when family sadness would overcome us. She enjoyed a big laugh, and bore the brunt of too much teasing with great humour. She was the steady glue of our family for so long.

Deedee was predeceased by Roger in 2016, her son Peter in 2005, and her siblings Frances, Bernard and James. She is survived by her children Karen McNally (John), Robert (Heather) and Janet Keenan (Michael), by daughter-in-law Heather Weber (Peter), and by 11 grandchildren, Tim and Sherry Aske, Edward, William and Tess McNally, Katherine, Jonathan and Rachel Aske, and Charles, Maggie and James Keenan.

Huge thanks to the kind caregivers at Shannex Quispamsis and Riverview who were gentle and sweet with our mom.

Arrangements are under the care and direction of Brenan’s Funeral Home, 111 Paradise Row, Saint John, NB (634-7424 www.BrenansFH.com). A Celebration of Deedee’s life will be held on August 22, 2022 at 10:30 AM from Brenan’s chapel. For those unable to attend, the service will be live-streamed and can be viewed by visiting Deedee's obituary and clicking on the link.  Donations in Deedee’s memory may be made to the New Brunswick Symphony - https://symphonynb.com/support/.

Roger wrote this short poem (one of many with the title “Deedee”) in 2011:

Bushels of flowers
are not for her,

perhaps to surprise me

when I find them

Share Your Memory of
Deedee
Upload Your Memory View All Memories
Be the first to upload a memory!
Share A Memory