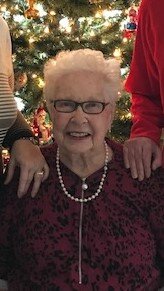 A life-long Saint Johner, Nancy, as a child, enjoyed playing with her friends in the south-end and roller-skating down Saint John’s steep hills. A graduate of Saint John High School and the Modern Business College, she worked as a secretary at various businesses in the city.  She was the secretary to the Medical Administrator of the Dr. Roberts Hospital School until it closed and then continued at the Department of Social Services until retirement in 1994.

She met and fell in love with Edwin (Ed) Morehouse and married in 1952. In her early years she was a member of Germain Street Baptist Church transferring to Hillcrest Baptist Church when she moved to the west side where she remained a faithful member until her death.

Nancy was immensely proud of her two children E. Kimberley (Kim) and Rachel Louise. She often said they were her two greatest accomplishments.

A talented cook and baker, Nancy had the unique ability to “taste” a recipe while reading it and adjust the ingredients to make it better!  She freely admitted she was hopeless at sewing and knitting. She had a wide circle of friends as well as wonderful neighbors. Nancy loved all animals and had many beloved dogs, cats, and birds over the years.  In 1975 Nancy and Ed moved to the “Glen Lyon” on the Kingston Peninsula. After living there for a few years, Ed built “Lyons Gate”, closer to the main road. They loved living on the Peninsula but eventually moved back to the city, to a bungalow on Driscoll Drive. Ed passed away in 2008.

Left to mourn Nancy are her son Kim and daughter Rachel as well as many nieces and nephews throughout Canada and the United States.

In lieu of flowers, memorial donations may be made to Hillcrest Baptist Church or the Saint John Humane Society (SPCA).

The arrangements are under the care and direction of Castle Funeral Home, 309 Lancaster Ave. Saint John (634 1701) A Memorial service will be held on Tuesday November 29, 2022 at 11:00 am at Castle “Fallsview” Chapel. Interment will take place in Greenwood Cemetery. Online condolences can be made at www.castlefh.ca

The family wishes to thank the staff at Shannex Tucker Hall (Northwood Neighbourhood) for their care and compassion shown to our mother during her time there.

Share Your Memory of
Nancy
Upload Your Memory View All Memories
Be the first to upload a memory!
Share A Memory