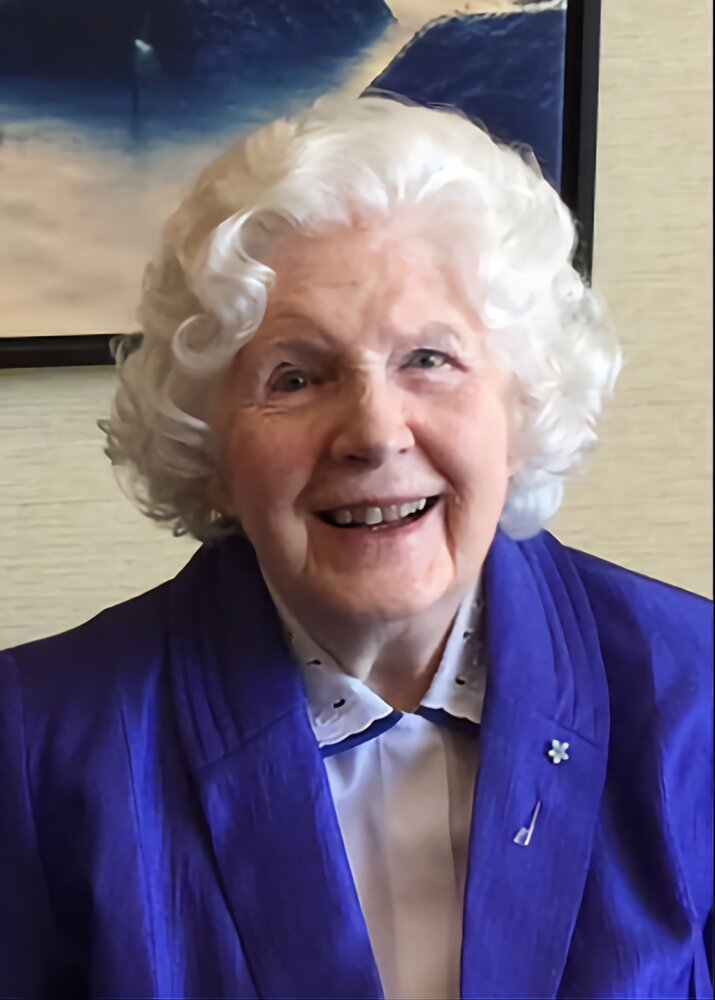 It is with great sorrow that we announce the death of Margaret Mary Rose McGillivray of Saint John, New Brunswick and more recently of Halifax, Nova Scotia.

Margaret was born on December 25th, 1922, the daughter of Francis Bartholomew Graham and Mary Beatrice Graham (née Harrington) of Saint John, New Brunswick. With her loving family surrounding her, she died on December 29th, 2022, after a brief time in hospital.

She is survived by her son Maurice and daughter-in-law Carol of Halifax, son Mark of Saint John, daughters Mary of Antigonish, Maureen and Monica of Toronto, son Michael of Saint John, grandson Graham (Nicole) and great-grandson Felix of Edmonton, and grandson Andrew of Shanghai. She is also survived by sisters-in-law Claire McGowan of Saint John and Jennie Graham of Toronto as well as many nieces and nephews.

A woman of great intelligence, courage, determination, and integrity, Margaret’s entire family treasured every moment they shared with her. She was quite simply a delight. She had an irrepressible sense of humour, a remarkable sense of optimism, and an unparalleled graciousness and kindness of spirit that drew people to her. Promptness, though, was not her strong suit, much to Gerry’s occasional chagrin.

Margaret’s early life was difficult; her mother died when she was just five years of age, and her path to adulthood was not easy. On graduating from Saint Vincent’s High School at the age of 16 she hoped to become a nurse, as her mother had done, but was not accepted due to her young age, so she trained as a secretary. She worked in various businesses in Saint John and Montreal. She met Gerry when she was nineteen; they married several years later in Montreal in October of 1945, where Gerry was then employed.

Margaret and Gerry were a couple who valued equality, each participating in all aspects of their lives together. Over the course of their marriage, Gerry turned to Margaret for her business sense, guidance, and support in all decisions big and small.

Once she and Gerry started a family, Margaret stayed home to raise their seven children, devoting herself to all the hard work that this implies.

She made and kept friendships wherever she went. Her dearest friend of eighty-eight years, Florence Nealis George of Saint John, also a centenarian, was an anchor in her life. They met in grade eight and had been in constant touch ever since. To their delight, they spoke on the phone on Margaret’s hundredth birthday, Christmas Day of this year.

In the mid 70’s, after the family had grown, Florence and Margaret pursued a refresher course to re-enter the work force, after which Margaret worked in the Red Cross office in Saint John until retirement.

Margaret was a woman of deep faith; she was active in several organizations over her lifetime, including the Catholic Women’s League, Catholic Family Movement, and later in life a regular prayer group in Saint John. After she and Gerry moved to Halifax in 2003, she became an active and enthusiastic supporter of Saint Patrick’s church and its social outreach. She looked forward to connecting with its warm faith community each Sunday.

Margaret took delight in many things – in travelling the world, in the beauty of music, in the wonder of flowers and birds, and in the joy of encounters with children, whom she charmed wherever she went. Her unfailingly sweet personality endeared her to all whom she met; her smile was a beam of light that shone on everyone. No one could meet her, it seemed, without loving her. As age took its inevitable toll, she lost none of her patience, her humour, or her gentleness. Her courage was exceptional right up to the moment she went to God.

She was a woman of luminous beauty, inside and out.

The family wishes to acknowledge the many years of kind and excellent care rendered by her physician, Dr. Saroj Premsagar, and her staff, Reba Keating and Sandra St. Peters, as well as the support and care of many Northwood workers and Irma Vaughan of PhysioCare at Home over the last few years.

As well, the family wishes to express special gratitude to Darlene Nickerson and Jean MacLean, her caregivers at home over the last year and more.

A Funeral Mass will be held at 12:10 pm (AST), Thursday, January 12, 2023, at The Cathedral of The Immaculate Conception, 81 Waterloo Street, Saint John, Interment to follow in Saint Joseph’s Cemetery, Saint John.

For those unable to join the family in person, the Mass will be livestreamed via the Funeral Home website.

In lieu of flowers, donations may be made to Doctors Without Borders or a food bank of your choice.

Arrangements entrusted to Brenan’s Funeral Home (634-7434). Online condolences and memories may be shared at www.BrenansFH.com.

Share Your Memory of
Margaret
Upload Your Memory View All Memories
Be the first to upload a memory!
Share A Memory