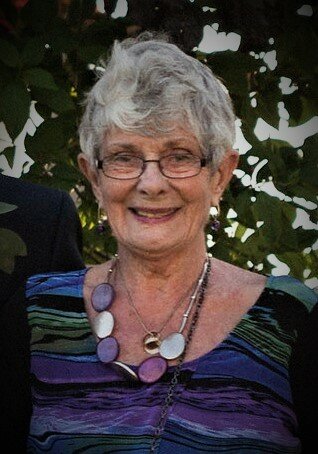 She was predeceased by her husband John Gilbert Allan and her brother Richard “Dick” Hollies (Annise).

She was truly an amazing woman and lived her life the way she wanted to. Even in her later years she continued driving her four wheeler around her property. Gramma had a green thumb and produced bountiful vegetable and flower beds.

As a founding member of the Akerley Quilt Guild Gramma helped make many Victoria Quilts. She especially enjoyed the comradery of her fellow quilters. Her favourite expression when quilting was “it’s good enough” - so many of her quilts are unique in that respect.

She loved her community of Cambridge Narrows and volunteered for the Life at The Lakes organizing committee. One of her favourite pastimes was volunteering at the library where she developed many friendships. Gramma was a member of The Crown Jewel Society of Canada and was known as “Panther Pat”. She enjoyed many adventures and fun events with this group.

Gramma even used Facebook, although poorly and sometimes inappropriately. She was in the Murdock Crew messenger group, and we’d often get odd messages as she was scrolling through her iPad checking out what everyone was up to. After her children all began attending school she started working at Sears. She made several lifelong friends, and they enjoyed yearly reunions at the lake after her retirement.

Although she said that she didn’t like dessert she was known to scoff back a helping of Pavlova and then declare that the leftovers were hers! We didn’t fight her for it, and it will be known as PATlova from now on.

Last year she decided to move closer to her family. Her new winter house in Rothesay was “okay” but her real home will always be in Cambridge Narrows on the Washedemoak Lake where she and Bubba spent their best days.

A Celebration of Life will be held on Saturday, January 21st, 2023, between 2 and 4pm at the Bill McGuire Centre, 95 James Renforth Drive, Rothesay. Arrangements entrusted to Brenan’s Funeral Home (634-7424).

In lieu of flowers, memorial donations may be made to Victoria’s Quilts Canada (VCQ) or a charity of the donor’s choice. Online condolences and memories may be shared at www.BrenansFH.com.

Share Your Memory of
Pat
Upload Your Memory View All Memories
Be the first to upload a memory!
Share A Memory